Cortisol is necessary for the body in normal levels. It has very important functions, for example helps regulate the water and salt balance and helps regulate blood pressure. But high cortisol is a problem.

Elevated levels of cortisol influence muscles by breaking them down, causing catabolism (breakdown of muscle protein). Muscle breakdown occurs through extraction of amino acids. (Amino acids are the building blocks of protein, and protein is the building block of muscles.) This catabolism occurs in order to transport the amino acids to the liver where they will be converted into glucose (blood sugar). One of the reasons for this is that the body wants to create fuel and energy. So this hormone makes the body consume the muscles in order to satisfy its energy requirements by turning them into sugar. And all of that sugar won’t necessarily be used. 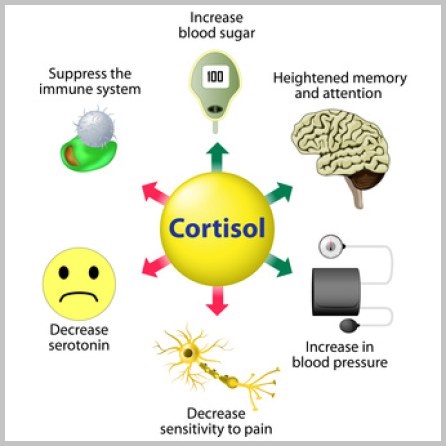 Cortisol is useful in fight or flight situations – in such moments the body needs and gets extra energy from internal sources (no time to wait for food or rest). This is one of its functions. But, elevated level of cortisol has negative influence in regard to increasing muscle mass because it breaks down muscles (turning them into sugar). Excessive exercise, not having a meal after workouts, inadequate sleep, all these factors lead to increased cortisol levels. Other reason it has negative influence on muscle growth is that it is totally antagonistic to testosterone. When cortisol increases, testosterone levels automatically decrease.

Another negative function of cortisol is that in high levels it suppresses the immune system. If you have ever experienced illness after training or increased allergic reactions, that is an indicator of decreased immune strength.

Cortisol is released during moments of stress in which the body needs additional energy to cope. This energy is created by converting non-carbohydrate materials into sugars. Thus cortisol raises blood sugar, but disallows its removal by insulin, i.e getting it into cells. Whys?

During moments of stress, cortisol cuts off many body functions such as reproductive hormones, digestive processes, healing and repair processes. Stress means jeopardy. The body is so adapted to handle threatening situations. In such moments the body doesn’t need reproduction or healing, instead, it redirects the energy into essential functions to fight or flight, lowering all other functions.

For example, someone during stressful situation (which for the body means fight or flight), doesn’t have a desire for reproduction. No desire to eat, no appetite. The mechanism is cut off. (Increased appetite comes later, but for this we’ll devote a special article.) Instead fighting off infections, the energy that would be assigned to the immune system, will be assigned to other parts. Cortisol puts the body fight or flight condition, by strengthening the appropriate functions for this, and cuts off or lowers all other functions. Such moments usually carry increased momentary energy, hearing, sensitivity.

All this is normal if these are rare situations. The body comes back to normal. But if a person is frequently under stress, they will have chronically elevated cortisol.

Cortisol doesn’t allow the other parts of the body to get the energy from the raised sugar, only the necessary parts. Thus chronically elevated cortisol can cause chronically lowered immunity and inclination to various ailments. If you’ve switched the body into fat-burning regime, increased cortisol will switch it back to sugar-burning regime.

Sugar gives quick energy, exactly what cortisol needs because what happens is a stressful situation, emergency, a threat.

Thus cortisol prevents the use of body fat.

Chronically high cortisol = chronically high level of blood sugar. It leads to increased insulin as a result of the continually high blood sugar. Unused sugar gets converted and stored as fat, first in the area of the waist and inside the abdominal cavity around the organs. Later on, insulin starts having less and less effect and elevates more and more. The gland that secretes it gets overloaded and then its function impairs. If this continues, the body can come into a condition whereby it can’t produce enough insulin.